Today’s electronics make it easier: DVD’s, CD’s, video games, GPS’s, mp3 players, e-readers, i-pads, smart phones, there seems to be no end in sight. All will keep our young travelers entertained on the road but let us not forget part of our job as parents is to enlighten and educate as well. In many cases these modern devices serve to isolate and encourage withdrawal not to mention the added tendency to induce car sickness as your offspring vibrate along the nation’s highways one bump away from projectile vomiting. You want them to be part of the adventure not complacent and incommunicado so perhaps there is merit in some of the “old fashioned ways” after all.


What did we do that made twenty years of family vacations possible? In a nutshell, here are the secrets…

I never regretted not having done home improvements or saving more money because the framed photos on my wall tell a story of decades of good times and family togetherness – they are my legacy. Our family vacations were about fun things to do, exciting places to visit and experiencing different things but they were also about being together and sharing those experiences. Hopefully Gavin and Adam will someday pass those riches along to their own children. 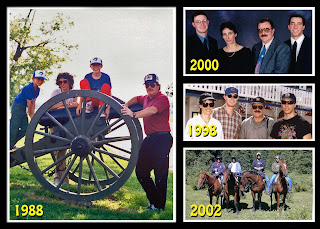 For further information go to www.thatroadtripbook.com
Posted by Eric Whitehead at 07:36 No comments:

The Road Trip With Children - It's Not Always Easy - Part 2

When we were finished travelling with the boys we knew it had succeeded beyond our wildest dreams. I always believed the road trip was a perfect family vacation because I had experienced it firsthand when I was a child. It was the holiday of choice as I grew up.


These were two week vacations and always involved a drive of epic proportions to get there. There were three siblings in my family so a little more ingenuity was required. The arduous, enduring drives to get there were often filled with not so much games and amusements as actually just sleeping the scenery away. Dad had built a wooden bench to fit over the hump on the floor of the back seat and fill in the area between the front and back seat so we had a nice wide double bed. That accounts for accommodations for two kids but remember I said there were three of us so where did the third kid sleep? Well that’s a stupid question – he slept up on the shelf in the back window of the car! We had not yet heard of auto safety; there were no seat belts in the car and it just hadn’t occurred to anyone that their beloved first born child might become an instant high speed human projectile as you cruised aimlessly down America’s highways and byways in search of the world’s biggest ball of twine.


The first thing mom and dad did to try to keep us all in the holiday mood was make sure an appropriate venue was selected  – where we stayed had to have at least a passing interest for the kids. It was fairly easy in that we always stayed in one place and never moved from one location to another once we reached our target destination. It was straightforward but it just as easily could have backfired and been a disaster if the chosen dwelling turned out to be a bust or the weather did not cooperate.


While in Cape Ann, Massachusetts we stayed in a century-old home that could have been a bed and breakfast or it might even have been a hotel, all I know is that it must have been a century old when we were there in 1958. I guess that was the thinking – if it’s old the kids will love it.


Fort Lauderdale, Florida was a Christmas break destination for many in the mid-sixties but we managed to steer clear of the crowds and always stayed at the Jolly Roger, a pirate-themed hotel right across the road from the glorious beach. That was not a cost saving measure, it was quite simple, in those days there were no hotels right on the beach. The thought was that pirates would keep them happy - and daughter Ruth, well – pirates, that will keep them happy.


The occasional side trip was the second element aimed at keeping the kids happy but there was precious little to choose from in the fifties and sixties so mom and dad did what they could. Maybe it was a stop at an antique store or a shell shop along the way but we were told it was a smuggler’s den or an old woman’s treasure shop and there was always ice cream so we didn’t care about the real truth.


There was also legitimate adventure while in Fort Lauderdale; perhaps a river cruise or a visit to an alligator farm or the monkey jungle. As lame as these things are by today’s standards, they were fascinating to us back then and as I became an adult I realized the reason there were only one or two of these adventures on any given holiday was the expense.


Even with all the efforts to entertain, the day did dawn when family travel came to an end when I, the middle child, was about sixteen. Older brother Paul had already bailed a few years ago because he had a job. It didn’t mean anything to me at the time but the myriad of tips and information was being buried deep in the back of my mind to be retrieved much later when I decided it was time to travel with my own children. 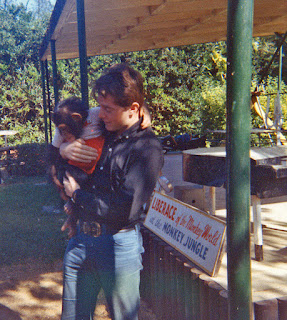 
in particular, The Holiday Road
Posted by Eric Whitehead at 04:44 No comments: