It’s been a great year for me and as the list of safe travel destinations grows ever shorter I take solace in the fact I am fortunate to be a Canadian. Not that we are immune by any means to the insanity that plagues the world today but we have an incredible array of scenery and culture at our fingertips in our own country.


If you’re retired and find you have time on your hands remember this: no road trip is too long. Canada has 10 provinces and 3 territories and all but Nunavut can be reached by motor vehicle. A cross country trip will open your eyes and your heart to the many wonders Canada has to offer. 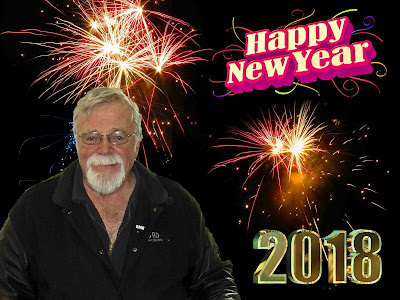 for more information go to www.thatroadtripbook.com
Posted by Eric Whitehead at 13:31 No comments:

As I alluded to in my last post, great road trips don't always have to be in nice weather. I love winter road trips because there's something about the serenity and peace driving a snowy back road in the depth of winter. It's the song White Christmas come to life. Just a tip though; stay off the main roads and highways. It's not the same, as a matter of fact, that becomes a major hassle.
Our last trip with our boys was to Boston at Christmas 2005. They were young adults then and very busy with university but were able to scrape a few days together so Karen and I made an adventure of it and drove from home and the boys came out later on the train. We took our time, enjoying the drive as we always do, passing through beautiful storybook towns. It was almost like we were living in a Christmas movie. 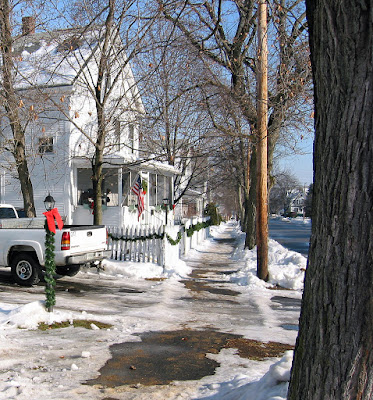 We selected the Fairmont Copley Plaza Hotel in Boston, A grand downtown landmark since 1912. It was elegant and we and likely the staff felt the Clampetts had arrived when we rolled in with back packs, suitcases and grocery bags.
Our first trip to Boston had been with the boys in 1988. Gavin had just read Robert McCloskey's classic children's book Make Way For Ducklings so was very pleased when we discovered the statues in the Public Garden quite by accident. Seventeen years later they both re-created their duck portraits. 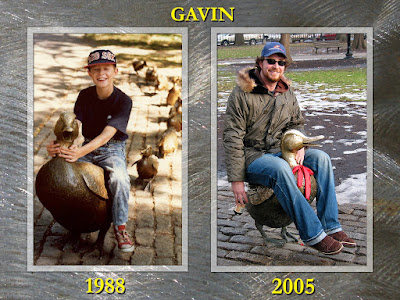 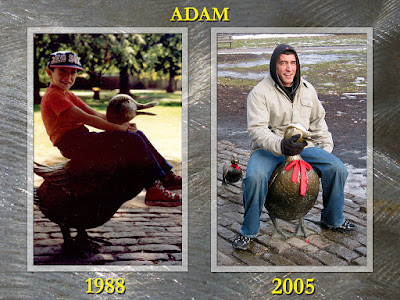 Gavin was working for a youth travel company at the time of this 2005 visit so was very familiar with Boston and we were the beneficiaries of his knowledge as he gave us a personalized tour along the Freedom Trail. The Granary Burial Ground was poignant as we had a very special day with the boys. 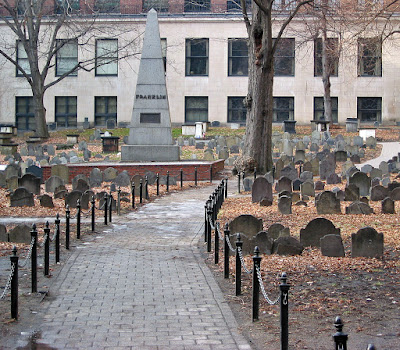 Literature and education have always been of interest to me so I was thrilled to visit Harvard and take an out-of-town excursion to Walden Pond. I always wanted to say my kids went to Harvard. It was a sad end to a family tradition but had to be. There have been more winter road trips on our own since and I'm sure others are in store. It's not just a fair weather venture. 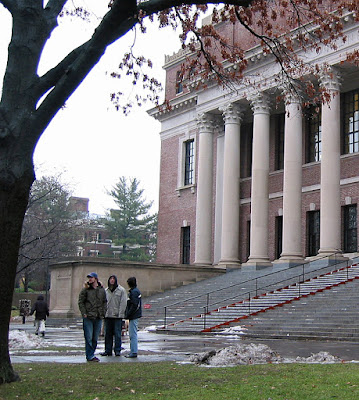 Posted by Eric Whitehead at 12:55 No comments: