We are in Inuvik for the day - hopefully we'll find some jackets! We were greeted this morning by a scene not normally seen by us at the end of August (see first photo below).
After breakfast we were able to enjoy the dog run. They have 36 huskies that need exercise every day so in the "summer" they do that with a 4 wheel ATV. The dogs seemed to love it and they loaned us some coats - otherwise we truly would have frozen. 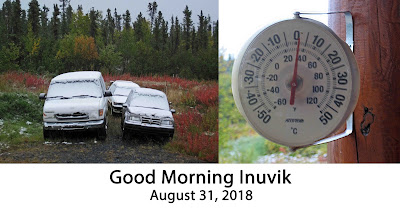 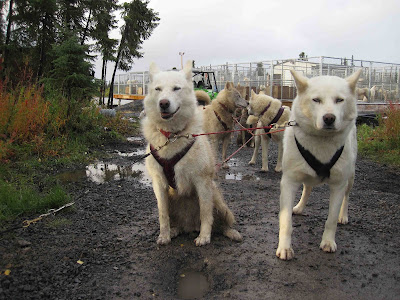 the dogs are ready 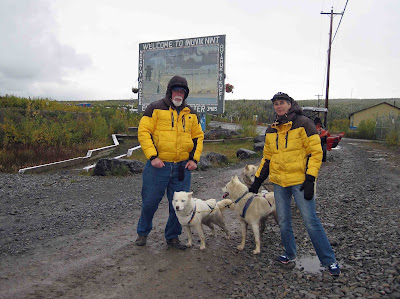 it is clear our adventure has gone to the dogs
see also   www.thatroadtripbook.com

Posted by Eric Whitehead at 10:51 No comments:

It was sunny for most of the day so the drive to Inuvik was great. Both ferries were running, otherwise we wouldn't be here. The road was a nightmare from Eagle Plains to the border but as soon as we entered NWT it was smooth sailing all the way to Inuvik.
We are suffering a bit (thank you Air Canada) but there is nowhere to buy any appropriate clothing up here. I swear somehow they will pay. 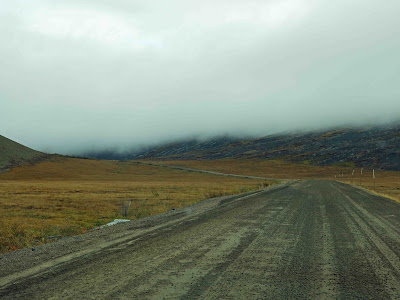 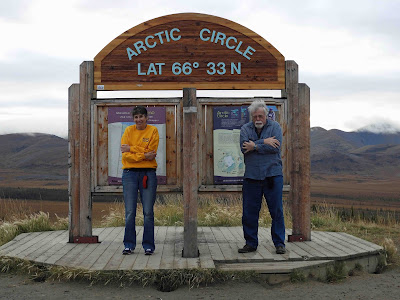 freezing our asses off - thank you Air Canada 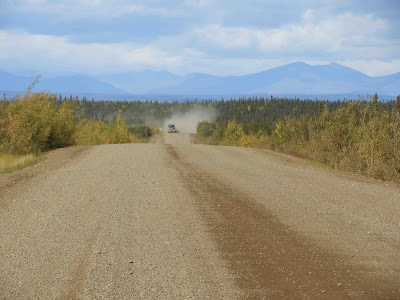 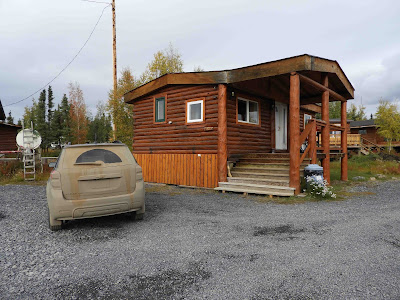 our Inuvik home - back up cameras don't work when the car looks like this
see also     www.thatroadtripbook.com

Posted by Eric Whitehead at 10:42 No comments:

The 400 km drive from Dawson City to Eagle Plains on the gravel Dempster Highway was wonderful. We encountered a variety of weather from sunshine to rain and everything in between - everything but snow - that's coming. It was a very scenic, relaxing drive; except for the stress of fighting the mud, sand and potholes in an ongoing attempt to stay on the road. It took 8 hours but was worth every minute.
We're still rolling the dice. We won't know until tomorrow if we can go any farther. 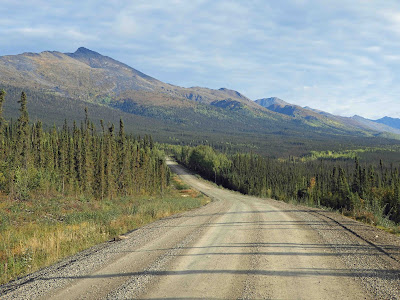 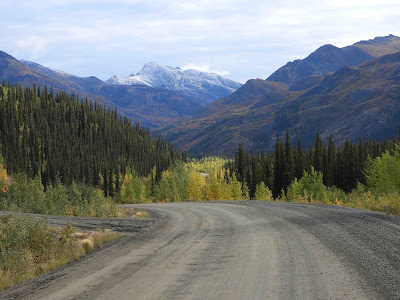 into the Tombstone Mountains 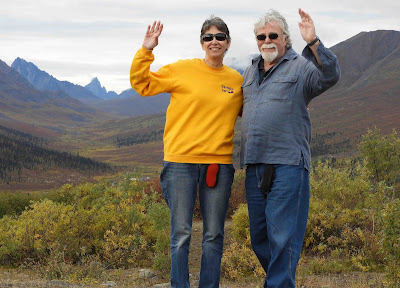 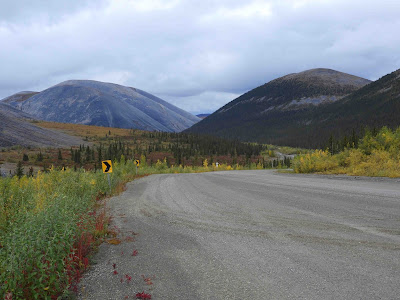 
Posted by Eric Whitehead at 19:08 No comments:

Dawson City has changed a lot since we were here with kids. The buildings are still there but a significant amount of the charm seems to be missing - and it's bloody crowded! Many of the streets are under construction and a high number of buildings and businesses are either for sale or permanently closed.
As sad a scenario as that was even more disturbing was the revelation that the ferry at Fort McPherson is shut down and the Dempster Highway is closed so one cannot get to Inuvik or Tuktoyaktuk. All this due to significant rains causing a dangerous rise in the river. How does a ferry not run because there's too much water?
Therefore, major changes to our plans are imminent. We will still be back to Whitehorse as planned to move on to Haida Gwaai. This type of thing is not an abnormality in our travel history but some fancy footwork is now necessary. Stay tuned! 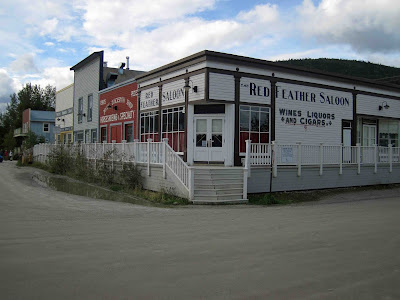 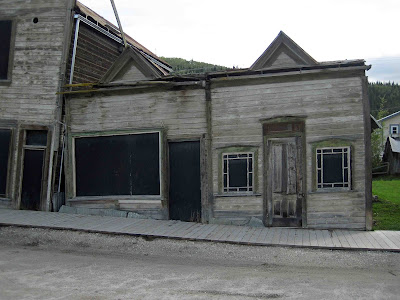 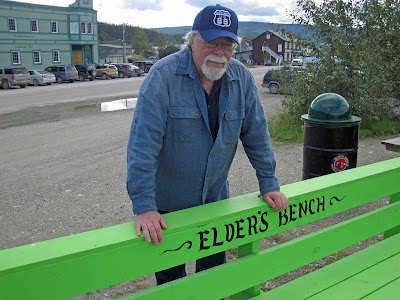 It says what?!
see also   www.thatroadtripbook.com

Posted by Eric Whitehead at 18:35 No comments:

We started our day on a very happy note meeting a high school friend Rosemary for breakfast then headed out for Dawson City. Our second bag containing all our rain and cold weather clothing is still missing. FYI, only the tourists call it Dawson City, locals refer to it simply as Dawson. It doesn't matter because most people confuse it with Dawson Creek, BC, Damn TV.
It was a strange day - rain on and off (mostly off) with the sun out occasionally and dark clouds prevailing the rest of the time. It was a very pretty landscape and we were happy to be there.
We're staying in a Gold Rush era housekeeping cabin - maybe there's some gold under this linoleum. Suffice to say it's ancient. There's a round cover in the ceiling, undoubtedly the location of the stovepipe.
We'll be in Dawson all day and night tomorrow then begin the Dempster Highway on Wednesday. A little bit of an hilarious note - we paid $200 for windshield and tire insurance. When I was here in 2003 I thought it a northern scam but discovered it to be valuable. We have already recouped that investment. Four major hits, lovely starbursts. The hilarious part is they all happen on the paved road. I figure the Dempster should just about demolish the windshield. 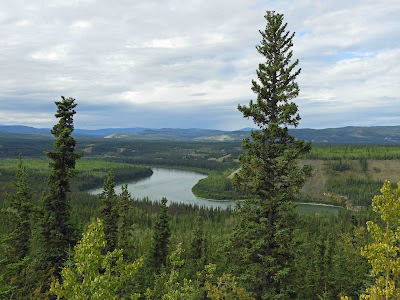 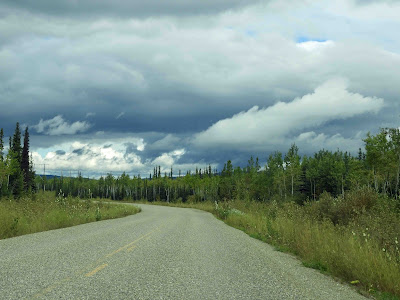 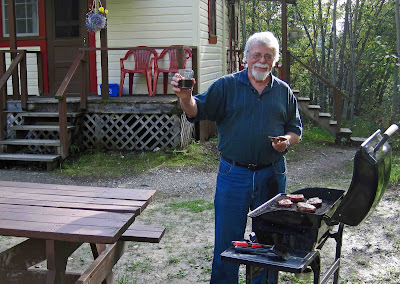 Posted by Eric Whitehead at 19:04 No comments: 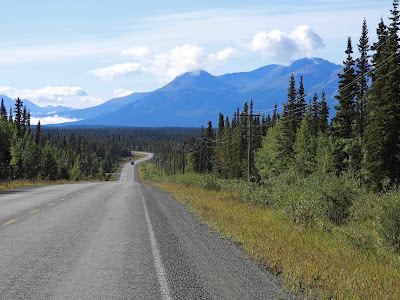 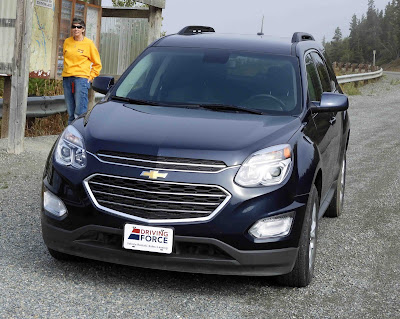 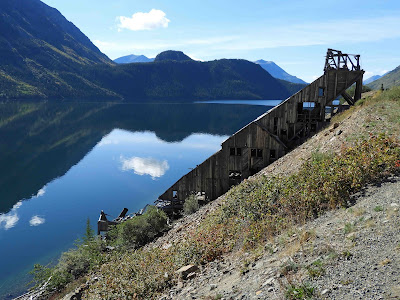 
Posted by Eric Whitehead at 16:44 No comments:

We made it safe and sound to Whitehorse, Yukon. After 8 hours flying on 2 flights and 5 hours waiting we arrived in Whitehorse at 9pm last night (midnight to us), tired but happy to be here. That feeling of euphoria was quickly demolished as we discovered that none of our luggage had chosen to arrive with us. They say Deja Vu is an unusual phenomenon; why then does it happen to us with such alarming frequency?
People always ask us why we travel to the places we do. Well check out this photo strip. There's a lot to be said for peace and serenity.

Posted by Eric Whitehead at 08:26 No comments: