How to Assure a Great Road Trip

At first glance it would seem, “What could be more boring than a road trip?” The key to making sure that doesn’t happen is to remain flexible. Don’t over plan things. That way you have time to change your mind and go where the road takes you.


In 1990 Karen and I were on our way to Florida with our sons Gavin and Adam. It was October and Universal Studios had just opened their amazing new theme park in June. We were all pretty excited about this holiday. As I was flipping through the channels in the motel that evening I paused on the Weather Network. An oncoming hurricane was due to hit Florida the next day, bringing with it copious quantities of rain and wind. These unsettled conditions were forecast to remain for a week to 10 days. That was really gonna suck!


A quick family meeting yielded a major change in plans. Even though everything was booked we decided to turn right instead of left in the morning and head west to Colorado – the only state promising sunny skies over the next week. The kids were extremely disappointed but we assured them we would go to Universal the following year. We even booked the hotel when we cancelled for this year, thus casting our promise in stone.


New found adventures like rock climbing and feeding and petting wild deer at the roadside made Colorado one of our best vacations ever – though it was a tad nippy in the snow dressed in our Florida attire.


That change was extreme but smaller alterations can be made as well when you’re not tied to a tight schedule and more often than not they result in good things happening that would not have occurred otherwise. Our list is somewhat endless but here are a few examples:

None of these things were planned; they all just happened and we took advantage, learning as we travelled year after year that these were the things that made our family vacations special and memorable and they always led to good times. 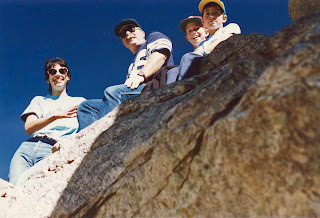