In the fall of 1993 Gavin would start high school and unfortunately the workload would increase – gone were the carefree days in a rural public school. That meant we would be unable to just pull him out of school for a couple or three weeks, there was now too much at stake to allow that to happen. Frighteningly, a summer holiday was now required; frightening because that meant crowds and congestion to me, something we had happily avoided for the last six years.


I was still not independently wealthy and my “Freedom 55” plan seemed to have a few clouds developing on the horizon. Therefore, this year we would choose to vacation a little closer to home and for a shorter period of time. New York City looked like it would be a great trip. This one was not so much poorly planned as not planned at all so adventure ruled once again as we drove off into the unknown.


As we got to the George Washington Bridge to get onto Manhattan Island I was perplexed by the numerous exits off the bridge. None of them appeared to be particularly well marked so at that point I made the decision to take the one that was least cluttered with garbage.


As we coasted to a stop at the bottom of the ramp we were immediately swarmed by a large contingent of local youths. I wasn’t sure if it was a gang attempting to hold us up in broad daylight or what but they were heavily armed with buckets and squeegees. We were in Harlem - “Welcome to New York boys”.            At one point I was reminded of the National Lampoon movie “Vacation” and I reacted pretty much the same way that Chevy Chase had in the film. We heard gunshots off to one side and I shouted to Karen and the boys, “Roll 'em up and lock the doors!” I was relatively sure we were safe as the shots were from some distance away but nevertheless it was nice to see Harlem disappear as we approached uptown Manhattan.


As the Clampetts, or in this case the Whiteheads, arrived in New York City with their matching grocery bags as luggage their unfamiliarity and lack of understanding of the ways of this world shone through with amazing clarity.        The charging cabs, the constant horn honking and the swarms of people would normally be a major source of irritation to me but here it seemed totally normal and even necessary – after all this was New York City, the Big Apple – and we were there to willingly take our bite of the madness.


The New York Yankees are the pride of the city and after a brief rest in our room we embarked on our greatest baseball connection to date. (The original) Yankee Stadium was built in 1923 and had always been the ultimate in major league stadiums so our love of baseball made this visit almost spiritual. The game itself was nothing out of the ordinary but the fact that we were in Yankee Stadium made it extraordinary indeed. Their opponents were our own Toronto Blue Jays so ball park hot dogs and a coke put the icing on the cake for us all. As we left the stadium I looked back at “the bat”, the facility’s exhaust pipe that had been built to resemble a Louisville Slugger, and thought how fortunate I was to have been able to share this moment with my wife and sons. 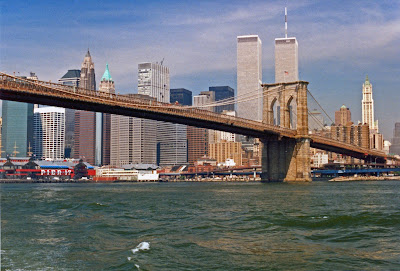 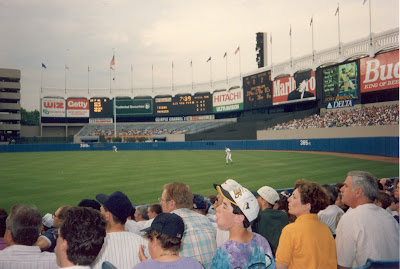 for more information go to www.thatroadtripbook.com
Posted by Eric Whitehead at 04:58