I insist that road trips not be over-organized because it’s the spontaneity and the sense of the unknown that make them so irresistible as a vacation format. We usually have a general idea of where we want to go and approximately when we’ll be arriving but we rarely book ahead because that adds a militaristic degree of conformance that doesn’t sit well with the way we roll. My secret for success is to be informed, be careful, be prepared to expect the unexpected and to enjoy wherever the road takes you. Okay, look around you, now just remember to smile because you are somewhere that you’ll never forget.


Having said all that, if the truth be known, I consistently find myself in situations that just beg to ask, “What the hell was that?!”


Leaving Coeur d’Alene, Idaho we took a quick detour into Washington State just so we could say we’d been there then crossed the border into northeastern Oregon. I was flabbergasted to find that in less than 20 miles we had seemingly changed planets and were now in a very arid, very open desert! What happened to the breathtaking seascapes and regal forests that were my ill-informed concept of what Oregon was all about?


I was surrounded by dry, parched earth and a dusty scene that seemed more from a classic western than anything else. The sun shone brightly and the sky was a brilliant crystal blue, contributing more ambiance to an already movie-like setting. As we stood in this desolate scene there was not a sound to be heard because even the wind had subsided and the roads were vacant. We were enjoying the solitude (at least Karen and I were) when suddenly we heard a distant rumbling. The sound increased rapidly building in intensity to a nearly deafening roar like a plane flying low overhead. We stood there, almost in shock, looked up into the clear, blue sky and saw absolutely NOTHING!


To this day I don’t know quite what to make of that experience. Was it a UFO, a stealth bomber, some sort of freaky storm, what was so audible and yet invisible to us? It wouldn’t be the first time we ended up sight-seeing on the fringe of a military base or probable missile silo but in those instances someone usually approaches us and asks us to leave explaining that we were about to illegally enter a “weather station”. We never did find out what the rumbling sound was but it was one of those things that only comes up in conversations about aliens and paranormal activities. 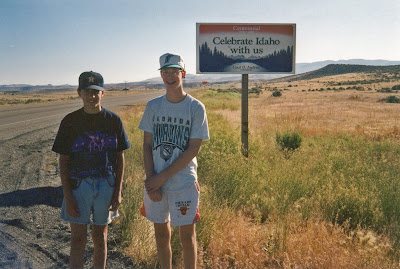