When it comes to road trips, the longer the better; that’s my preference but I will concede it may not be everyone’s – you’re certainly not going to get kids attuned to that philosophy. It was October 1992 and although we had nearly three weeks allotted to this vacation we had a gargantuan distance to cover as we would be driving to Las Vegas, through the American southwest and back. If we were going to cover a lot of ground we had to get a tremendously early start so we discovered hey, there really is a 3 o’clock in the morning. Of course it was dark then, which helped because the kids were able to sleep until daylight and we were in the United States by then. We had usually headed in a southerly direction on previous trips so this was dramatically different and at about 6PM we passed the Gateway to the West, the St. Louis arch!  That was about from our home in Gilford and a monstrous drive for one day so we stopped just outside St. Louis.


Although we had been to Colorado in 1990 this was our real introduction to the Wild West, the one that Gavin and Adam were familiar with thanks to Hollywood folklore. The next day after what could politely be referred to as a tediously boring drive devoid of anything remotely interesting, we reached Dodge City, Kansas, where we would begin our true quest for the West.


Best known as the setting for the long running television series “Gunsmoke”, Dodge City lies in the southwestern quadrant of Kansas and is a testament to the Wild West. It has maintained part of its primitive downtown area as a tourist attraction. One street, a rustic wooden walkway, preserves the old west with saloons and stores surrounded by a wooden picket fence highlighted by an old steam locomotive and a wonderful old windmill. Looking through the fence was like looking through a window in time.


As we drove away from Dodge City early the next morning we realized that it was the radio not the television that provided the best entertainment in these parts. Scattered amongst the numerous reports on the hog futures and corn prices of the day was the local news of barn dances and prison breaks. Prison breaks were hardly ever in the news at home, see, we just don’t get out enough - we need to travel more. 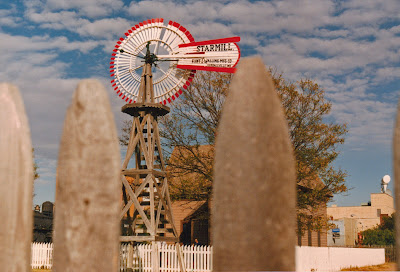 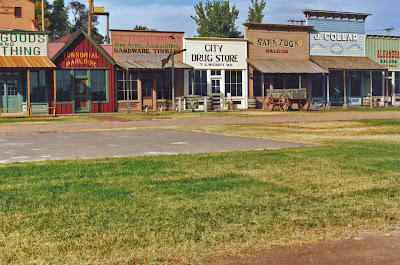 for more information go to www.thatroadtripbook.com
Posted by Eric Whitehead at 10:03