In 1971 I visited Las Vegas on a road trip with a friend. It was an oasis in a massive desert then, not nearly as flamboyant and ostentatious as it is today or even in 1992 when we first visited with our kids. Cruising into Las Vegas is always an experience that’s bound to leave some sort of an impression. We waited until dark then got into the van and took a drive down the famous Las Vegas Strip because, undeniably, this town is absolutely breathtaking at night. As the Elvis song proclaims, “Viva Las Vegas turnin’ day into nighttime, turnin’ night into daytime, if you see it once you’ll never be the same again.”


As amazing as the neon lights of the Strip were, the area on Fremont Street in downtown Las Vegas known as Glitter Gulch in 1992 was the vision that most people have of this sparkling city in the desert. Every building, hotel, casino, even a McDonald’s, for a five block stretch is glowing neon. Fremont has now been isolated and enclosed so never again will we see an incredible car chase like the one in the 1971 James Bond movie “Diamonds Are Forever”.


Las Vegas in the daytime is less spectacular visually but the individual hotels and casinos have a history all their own and are worthy of some exploration. In late 1945, mobster Benjamin "Bugsy" Siegel and his organized crime associates came to Las Vegas to purchase the El Cortez on Fremont Street. Shortly thereafter Siegel used profits from the sale of the El Cortez to finance a two thirds share in a new venture. The project was plagued with rising construction and design costs from the start and doomed to fail. Only after an expenditure of 6 million dollars (an absolute king’s ransom in those days) did the Pink Flamingo Hotel and Casino flourish. Opened on December 26, 1946, it was billed as the world’s most luxurious hotel, the first luxury hotel on The Strip.


My favourite spot on the Strip in 1992 was still the Sands Hotel. Once owned by reclusive billionaire Howard Hughes in the mid-1960s, its most famous claim to fame was a three week period in 1960 when, during the filming of “Ocean's Eleven,” they organized an event in the Copa Room called the "Summit at the Sands", where for the first time Frank Sinatra, Dean Martin, Sammy Davis, Jr., Joey Bishop, and Peter Lawford performed on stage together. They would forever be known after that as the Rat Pack. They were responsible for the definition of “cool” at the time and it is that kind of history that intrigues me the most. 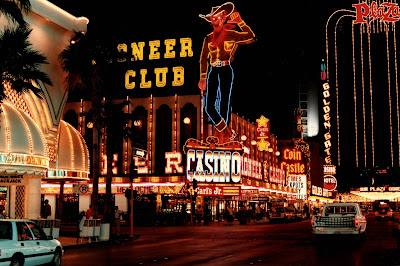 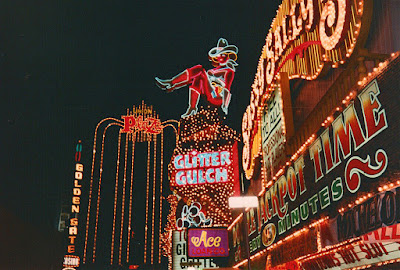 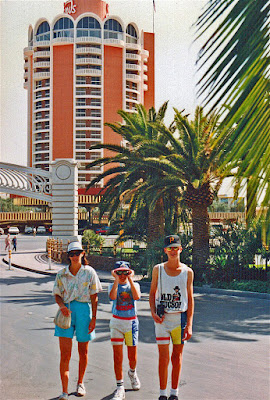 for more information go to www.thatroadtripbook.com
Posted by Eric Whitehead at 08:14