I Feel Like I'm In A Real Western Movie

You cannot visit the true west and not take a horseback ride, so a 7AM sunrise found us at the Desert High Country Stables in Tucson eagerly awaiting our first ever trail ride with the boys. We could not have dreamt a better start as the sun rose and turned the desert sky from red to orange. There was just the four of us on this ride; that in itself was rather nice so with “A Horse With No Name” playing in my mind we headed out to explore the desert flora and fauna on horseback. It was a perfect start to another picture perfect desert day.
Because we had to return to the stables before the heat became a danger to the horses and us, we had a full day ahead of us and chose to spend it at the Old Tucson Movie Studios just west of the city. I had always been a big movie fan and particularly interested in film techniques and behind-the-scenes information so this was going to be a big deal for me. Old Tucson Studios was originally built in 1938 as a replica of 1860s Tucson for the filming of the movie “Arizona.” In 1960 the Studios were opened to the public and they grew as various production companies left something from their set on site as each film was completed.
As the day wore on it got hotter and hotter and by the time the first stunt show ended in the early afternoon it was a real scorcher. Many people were uncomfortable but it hit Adam very hard and he alarmingly collapsed from heat exhaustion necessitating us to rush him to the infirmary. Staffed by medics in cavalry uniforms, Matt introduced himself to Adam as he took his blood pressure. After a drink of Mountain Dew, a cold compress on the back of his neck and a bit of rest Adam recovered and we were on our way.
Gavin was a little jealous of all the attention given Adam but I think it was mainly the fact that Adam got a sweet drink and he didn’t. Being a little nervous we spent a bit of time just relaxing in the shade and enjoying the people walking by and the various activities that unfolded around us. Old Tucson Movie Studios had a cornucopia of authentic Western dirt roads, boardwalks, rain barrels and saloons with swinging doors so this little break gave Adam a chance to stabilize.
It was more than an enjoyable visit, it was a chance to get a feel for the culture of the Old West in an authentic (looking) setting. 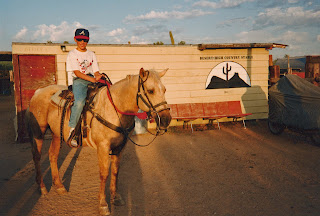 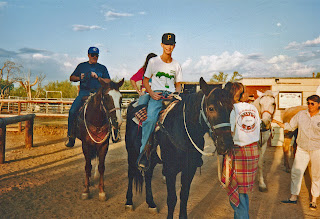 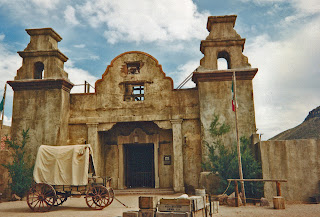 for more information go to www.thatroadtripbook.com
Posted by Eric Whitehead at 12:34