Interesting Activities - One of the Keys to a Successful Road Trip

Teenagers are probably the most difficult people to keep interested especially when it comes to family vacations. Road trips can be a lot of fun but there’s probably not anything more boring for the teens than riding around in a car for days on end. Therefore, interesting diversions are a necessity. Maybe an unusual attraction or an intriguing destination will work. We always found an activity of some sort (the less common the better) worked out well.


Jackson Hole is a valley lying between the Teton and the Gros Ventre mountain ranges in Wyoming. The name was given by trappers who entered the valley from the north and the east, descending along steep slopes, giving the sensation of entering a hole. The long shadows cast by the late afternoon sun fell across the dusty meadows as we saddled up our horses for a trail ride. Well, we didn’t saddle them the wranglers did and Adam was about to find out that they did a less than sterling job.


It started out innocently enough – a line of a dozen or so riders enjoying the setting sun on a summer evening. As we wound our way up the dusty trail into the mountains I could see all the riders in front of me from my vantage point at the end of the line. I noticed Adam seemed to be leaning a little to his left side but I didn’t really worry about it I just hoped he was comfortable. As we proceeded, one dusty curve after another, Adam became even more off centre. The situation got worse and worse until finally he fell right off the horse - actually he didn’t fall off the horse at all, the saddle did – he just happened to be in the saddle. Our group was going slowly at the time so both horse and rider were fine but I suspect the cowboys were a little embarrassed as they made sure the saddle was cinched up tightly before Adam got back up on his horse.


Even with that little calamity Adam enjoyed the ride, as did we. It was born from spontaneity here but became something we would enjoy as our Holiday Road continued in subsequent years, culminating in a three day adventure in the Canadian Rocky Mountains almost ten years later. Like beauty, interesting is in the eye of the beholder and you’ll never know what works and what doesn’t until you try and when you do find something it can add a fulfilling element to any road trip. 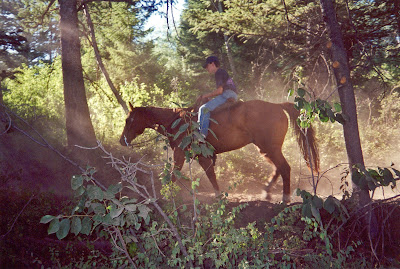