They say getting there is half the fun, so we were going to make sure that was the case and at times we wondered if the destination had anything to do with the vacation process at all. Always take advantage of opportunities when they arise – you will rarely, if ever, be disappointed. So as we were about to enter Cape Cod we realized we were very close to Martha’s Vineyard off shore and decided it might be nice to see it on a day trip. I don’t know if it was the mystique of the Kennedy connection or what it was but something told me we had to go there.


We boarded the ferry at Woods Hole somewhat apprehensively wondering how Adam might react to the voyage. Fortunately, for all concerned, it was a relatively short hop so he was fine; as a matter of fact, we could not have ordered a better day as we landed at Oak Bluffs on the island to a perfect, bright, sunny day. It’s not a particularly huge island but we definitely needed a vehicle to see it so, with our van parked safely on Cape Cod, we rented a Jeep convertible for the day.


Well, we were driving through the woods on a sand, yes sand, road and came across a pretty cool little fishing village. Menemsha, on the northwest side of the island, near Gay Head, was easily recognized as a fishing village by the boats and docks and small shanties. However, if by some wild stretch of the imagination that got by you, the absolute gagging smell of fish made for a positive i.d. Beyond stench, the smell was almost nuclear in its explosive pungency.


In an old shack a rustic, almost caustic message spray painted on the side of a fridge in a very child-like hand caught my eye and I laughed as it spoke volumes to me about the people who lived there. “Don’t smoke and don’t be neat,” a clearer request could not likely be made anywhere. I’m not sure about the smoking part but the resident of this humble abode certainly upheld the cautionary neat request.


As we approached the docks to head back to Cape Cod near the end of the day Gavin and Adam discovered something that would prove to be their number one activity on this trip. The beach had a very wide expanse of sand bordered by grass topped sand dunes. It didn’t take them long to discover that jumping from the top of the dune to the soft beach sand below was a lot of fun. It was wonderful for Karen and me to watch them as we realized that along with the enjoyment they derived from jumping they were also getting good exercise and lots of fresh ocean air – all because of a spontaneous side trip. 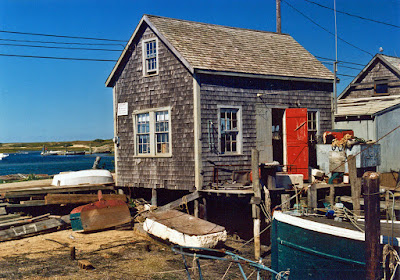 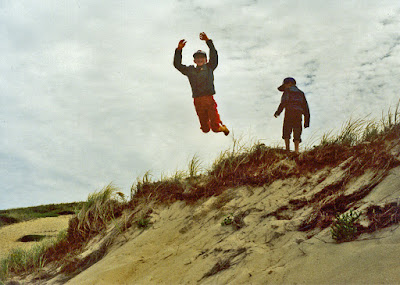 for more information go to www.thatroadtripbook.com
Posted by Eric Whitehead at 08:36