Craters of the Moon National Monument is perhaps the most aptly named place I have ever been. We stopped strictly because we saw the name on the map on the way to Idaho Falls, our stop for the night. Craters of the Moon is located on the Snake River Plain in central Idaho. It is at a moderate altitude of close to 6,000 feet and is extremely volcanic in nature. The monument encompasses several hundred square miles of lava fields interrupted by numerous, large cinder crags and monstrous, magnificent cinder cones.


I have not been to the moon but I have been to Sudbury, Ontario. Often described as being between a rock and a hard place, the geographic basin surrounding the city was formed by a major meteorite impact about 1.8 billion years ago and it doesn’t look a whole lot different today. Let me tell you, Craters of the Moon made Sudbury look overgrown.


It was July and it was hot so what better place to be than on a totally black, porous surface for hundreds of yards in all directions. Naturally something strenuous and exerting was in order. A long, slow climb up one of the behemoth cinder cones set before us a view of a landscape that really could not be described as anything other than lunar. There was very little plant life and no sign whatsoever of any wildlife, nothing but a black, open desert. As strange as it may seem I found it fascinating and enjoyed it immensely.


Spontaneity  is one of the key ingredients of a successful road trip. Your ability to forget your schedule and seize what pops up out of nowhere is what assures excitement and often wonder in even a mundane vacation. 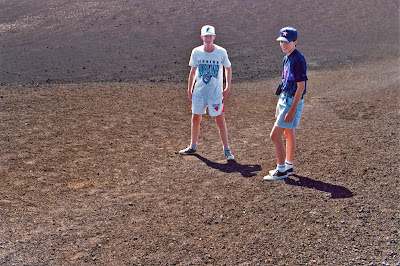