Today started well and ended really well but in between - boy, what a frustrating mess. As we left our hotel in Florenceville I was impressed to see the commitment New Brunswick has made to our environment by using wind power. 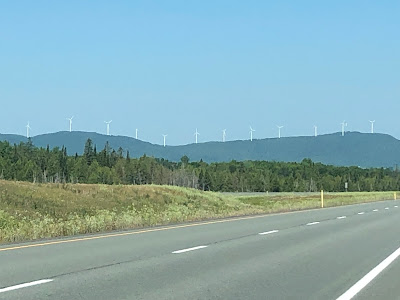 We were going to take the ferry from Riviere du Loup to Saint Simeon because we were headed for Tadoussac for two nights. We got there two hours early as there are no reservations so were in the first of 8 or 10 lines about 10 cars back. This was going to be a full ship. About half an hour before sailing our line started to move so we filed out like sheep. We left the parking area and headed out toward the highway. My first instinct was "Hey, there's no boat here." I thought maybe the ship could not dock here, after all it was low tide, so we had to meet it somewhere else. After about ten minutes on the highway I thought WTF we're not going to any boat. Two hours later we were in Quebec City. 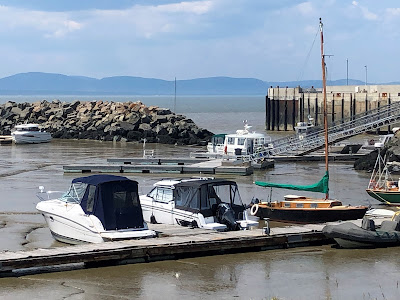 It took us three hours to get out and headed back north on the other side of the river. The problem was both our GPS's took us to highways whose access was closed and barricaded. It was 8 o'clock by the time we found a place in Baie Saint Paul in the Charlevoix region of Quebec. That means we will only have one day in Tadoussac. We called them and tried to get a second day added to our current booking. They were good enough to not charge us for cancelling today as we were well past the cancellation cutoff but were full for the day after our booking. 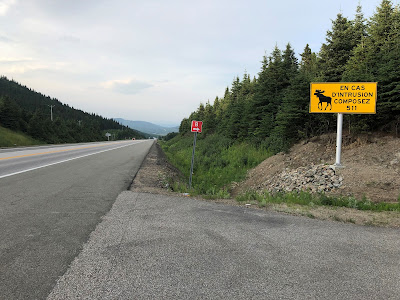 The Charlevoix region is gorgeous - no, there are no moose. 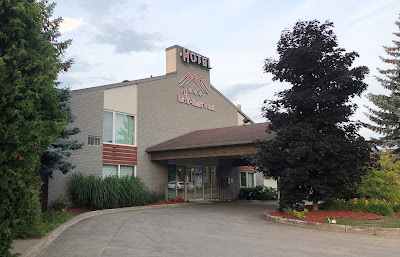 We're nearing the end so I hope there are no more days like today.