Sadly our time on the road is rapidly coming to an end. This is likely the last post from the road. I'll post a wrap up once we're home next week. We've been on the go since Monday and unable to post until now. We left Isle Madame on Monday morning and stayed overnight in Antigonish, NS. There is a wonderful immigrant story come to life there in Peace By Chocolate. Forced from their home country of Syria they came to Canada, resurrected their chocolatier business and are doing well and giving back in their community. We met several of them and Karen had an instant bond with the mother recalling her own mother's story of arriving in Canada after the war. 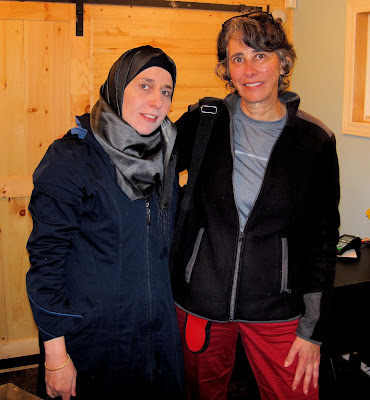 Tuesday morning we left Antigonish and moved on to Mineville to visit our friend's Mike and Gayle. Along the way we stopped in Victoria Park in Truro on their suggestion. A beautiful park with lots of trails to walk, waterfalls and plenty of stairs. It was a gorgeous day and we spent a couple of hours enjoying Nova Scotia. 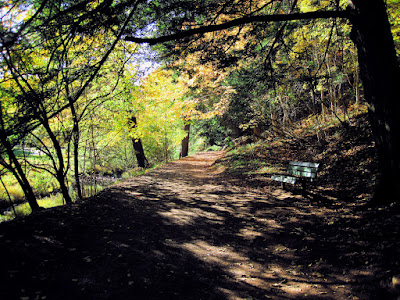 We have known Mike and Gayle for over 45 years with a sizeable interruption when they moved to Europe for a couple of decades. We don't get the chance to see them often and even less in their beautiful Nova Scotia home. One day is not enough of a visit but all we had time for this time around. We did manage to squeeze in a hike through the salt marsh. 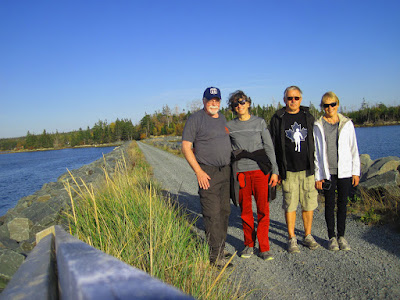 We wanted to make it to Fredericton, NB last evening and we did but it was full. We tried several spots and all were fully booked - some government conference we were told. The boys will remember many such instances in our travels in years past. Always something absurd when it should never happen. There is nothing on the TCH heading north so we diverted to the James River road hoping to find something before we got to Edmundston 300 kilometres away. That's a beautiful drive in the sunlight but a nightmare in the teaming rain and the dark. It's a winding road alongside the river but has numerous warning signs about moose. Luckily this time we did not see any. Seeing them as they slam into your vehicle at 80KPH is not a good thing.
We landed in Florenceville-Bristol around 7:30PM. The French Fry Capital of the World. Everybody's got an angle.
Until we meet again in a few days...Eric and Karen
www.thatroadtripbook.com
Posted by Eric Whitehead at 04:34