What a wonderful day. You have to understand that we have travelled this fabulous country from coast to coast to coast and seen a few deer, even fewer moose but generally nothing bigger than a squirrel so this was nothing short of incredible. About 30 kilometres before Kenora Karen shouted out, I made a U-turn and amazingly he was still there! 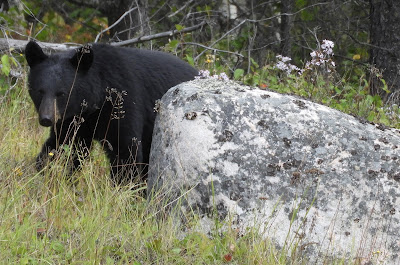 ﻿
Immediately following this sighting I saw a car on the side of the road. Thinking it might be another bear we stopped and realized it was a woman with a flat tire, She had two young children with her so we offered to help. She was a robust woman and probably could have changed the tire a lot faster than I but we were in a good mood. The bolts were frozen so she poked a pile of laundry in the front seat and her strapping older son emerged very bleary eyed. I decided there was nothing we could do so we continued on our way.
Always a thrill when I see the name - and I always wonder what the history is. 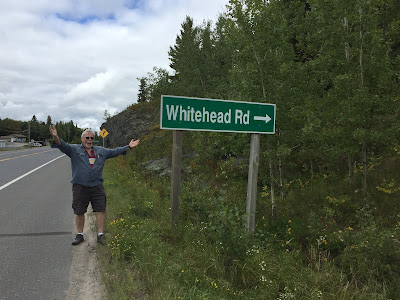 We're staying at a ranch just across the Manitoba border from Ontario. Our own little cabin in the woods for 3 nights. It's not as serene as you might think as it is just off the TCH and the traffic noise is horrendous. The nearby village was closed - yes the whole village for the season so we had to head back to Kenora for groceries. While there in downtown we were treated again to another of nature's offerings. The guy who lived in the house just walked inside with that "no not again!" look on his face. 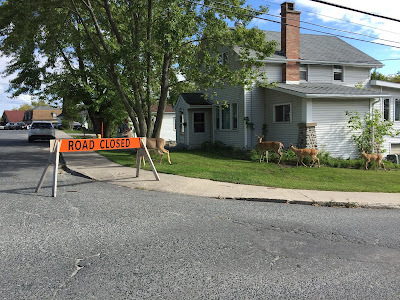 There's no TV here but that's quite alright with us. The only thing I need to make my vacation a success is a BBQ (oh and the wine is kind of a must as well). Cheers! 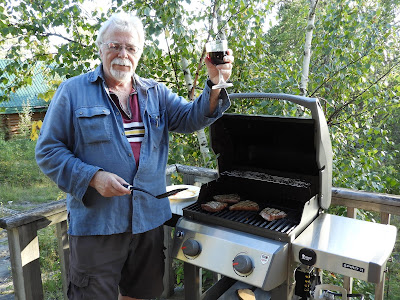